Just a drop in here to thank (Leo Fender) more than brag. I been playing guitar since I was 14, drum since 11 but that fadded when I realized drummer either never get the girls or get the ugly ones. Played in band in HS and College around Chitcago, and then I realized I enjoyed studio work more. I grew up on Fenders, Vox in the mid to later 60's and Marshall's for a while. But studio work means travel lite, travel fast, travel with clean - power - versatility. Traveling with a Vox AC30 TB meant needing a big dolly, a Marshall head and cab meant paying a gorilla to move it. Some of my older Fender's *50's and early 60's) were lite and almost clean but weak (Princeton or Deluxe, even my "Pro") except for the Twin Reverb, which was back to being HEAVY. So at a shop in Frisco in early 1981 I tried this newly released Music Man "110RD Fifty" because the manager said, "Leo designed it, MM is his and Forest White's company". I looked at this little shit amp and said "It's what, 20 watts?". The manager said, "you'd think so, but it's an honest 50 watts and it's CLEAN!". I grabbed a new Strat, a Les Paul, a Gretch Country Gent and a ES-335 off the shop's walls and played through the 110RD Fifty for the next hour. I was completely blown away and didn't even argue the price, paying him with a check. It has always been my main "go-to" studio and small club gig amp (mic'ed thru the PA). Sure if I need dirty I bring in my 57 Tweed Princeton or 56 Deluxe, for more oomph and grunge my 64 Deluxe reverb and out-door gig's my 65 Twin Reverb for Jazz or Blues, or my '81 Marchall JCM800 100watt Combo Lead Series 2x12's for hard rock / "Brit Rock". Along the way, I also took up being a Luthier - repairs and restoring vintage guitars, mandolins and banjos.

If I needed to sell amps, most of them I'd have to think about for a while, but my "bought new" MM 110RD Fifty ..... no thinking about it, I'm keepin' that one till my clock stops. I'm 70 and still playing and still playin' my "MM"

Ps ... Does anyone know where I can get some new MM appropriate grill cloth with maybe a little "aging color" for my 110RD? The original cloth is literally beginning to fall apart, like disintegrate from the same studio / club / concert air I've been inhaling too! 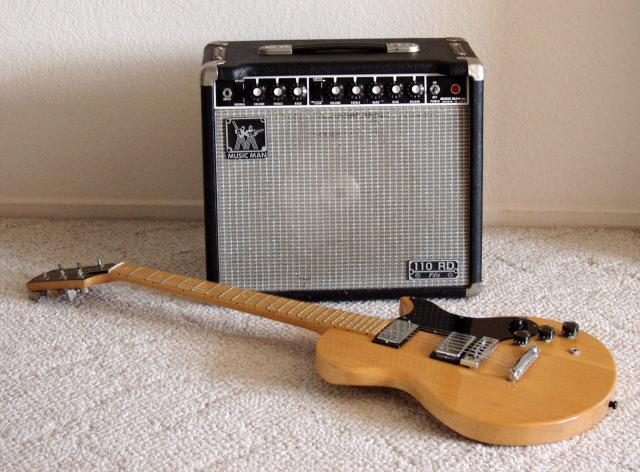 which speaker are you using I see silver dust cap...mine has the black grill cloth black tolex it looks ok...looks like this one but its black 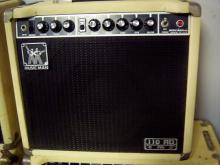 Oh man I changed out the speaker back in the early 90's and I just don't remember what the speaker is. I only use Alnico magnet speakers, but the brand escapes me. It has a square magnet and the code on the magnet is 10VAGABC and 67-7940, whatever that denotes. It was rated for 50 watts RMS. I had a habit in those days constantly playing around with changing speakers to get a different sound. Wasn't thinking about preserving "vintage status" on my work-horse amps. I do recall that the original speakers used in the early 80's 110RD and 112 RD models were Eminence and I believe that they were a Ceramic / Alnico hybrid, which Leo had a thing for, also for guitar PuP's. You know, I think I put that original speaker in a 66 Deluxe I have somewhere.

Like you, I have a 110RD fifty; for grill cloth I would recommend Mojotone. They sell aged Fender-style grill cloth. https://www.mojotone.com/Grillcloth_x#/
Good luck,
Ewan

Yeah, I saw their aged cloth,

Yeah, I saw their aged cloth, little pricy though. I've aged Fender cloth before myself with spraying a mist of mild brewed black tea (which is really brown) on it and leaving in the sun for a week. Works great. Mimics a few years of bar Nicotine Smoke staining.

The speaker code is for an Eminence speaker manufactured in the 40th week of 1979.

After I wrote the reply above

After I wrote the reply above, I became curious as to what in the h*ll I had put in the 110RD Fifty. Too long ago for me to remember. I found a note I left in the bottom of the amp that said "10 inch Eminence speaker replacement from Music Man". So then I traced the code numbers for the date, which are 67 as meaning an Eminence made speaker, 7940 as you noted 1979 and the 40th week of 1979, huh older than my 81 110RD!. So then I called Eminence and asked what the 10VAGABC meant (obviously 10 = 10inch) and they said that the ABC code was always used for speakers made for an amp manufacturer (generic code meant proprietary) and VAG probably meant which company. But Eminence doesn't have records from before the later 1980's, so couldn't say who "VAG" was. I also found out that the Square magnet Eminence speakers are Alnico, not Ceramic like the later round magnet Eminence are supposed to be.

I worked for Fender (the Guitar side) from late 1972 - 1999 and we didn't use Eminence speakers, so I didn't get it there. I seem to recall that I had a problem with the original speaker in that 110RD Fifty and took it over to Forest at MM to look at. Left it there for a week and then picked it up repaired. So I'm guessing that perhaps they put this, apparently older, Square magnet Eminence 10inch in it. Every picture I've ever seen of the back of MM 110RD or HD Fifty's show a round magnet Eminence speaker with a MM label on them. If you know anything about Leo Fender, it's that he NEVER threw anything away, and often used older "NOS" parts in later production guitars and amps. I have a 1964 Blonde Telecaster that is 100% original and it has a 1962 bridge pan on it, but the neck and pocket are both dated 1964 ... body from March and the neck from August. I'm the original owner, got for my birthday Dec 1964 from my parents. Still have it.

Hey VintageGuitaz! I'm pretty certain those square magnet eminence and CTS speakers are ceramic. The alnico's have the magnet under the horseshoe. The reason I'm interested is that I love these speakers, they sound amazing clean. I own a couple 12's and a pair of tens too! I have one 10 in my RD50 with a 12 in an extension cab. Everything I've read says they are ceramic speakers but I would love to be proven wrong! I cant seem to dowload the pics so heres some image links to my square magnet 10's: (love your Fender stories!)

Pal, you need to do much better research. While 110RD-50HD from time to time came with Ceramic magnet speakers, nearly ALL in 82 and 83 WERE Alnico with the trademark Eminence Square Magnet. Mine came with one, the one in the photo, which I've have re-coned twice since I bought it new in 1983 right from the Music Man factory store (I worked for Fender at the time (1972 - 1999) and knew many that worked at MM (migrated from Fender to MM).

While Eminence documentation is sketchy, they DO REFERENCE that they HAVE made Alnico Magnet speaker through the years from the 1960's. If you watch this video at time mark 3:07 you can see the ladies working on the Alnico Square magnet speaker frames. https://www.youtube.com/watch?v=yOx4JYHW3-w

Ceramic speaker magnets are typically ROUND, not square or horseshoe (U)

Also, here is a reference to the 1980's ALNICO SQUARE MAGNET Eminence speaker, as for sale on Reverb dot com. https://reverb.com/item/6408477-eminence-10-alnico-square-magnet-speaker...

The Square Alnico Magnet Eminence have not been made in decades, but doesn't mean they certainly DID exist in quantity in many amplifiers, including MM! 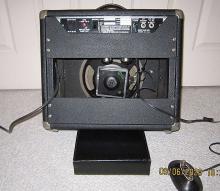 Well, I stand corrected!
Funny, cause I can find hundreds of posts out there that disagree with your assessment, and I've seen the occasional seller call them alnico's as well. (ups the price a bit too!) But you seem to be quite sure of yourself and I am not going to attempt to dissuade you. I have one similar to yours in my RD50, BUT Its not stock to my Music Man as I installed it as a replacement. Most Music man amps came with a round ceramic, or horseshoe alnico and they all had that big Music Man label on them. But really, I'm not here to say they didn't use the square magnet eminence speakers. Just that I believe they are ceramic until proven otherwise.

Well considering I bought mine new.
Bought it from the MM factory store, just "down the street" from us at Fender.
Yours isn't original.
I've sent numerous visual proof. Even MM refers to their making Alnico speakers.

So, I'm now burned out on this ridiculous discussion with an amateur with no proof and a second hand amp, with a non original speaker as the talking point. Adios.

So you link a video with ladies sitting around their square magnet speaker assembly line and that's definitive proof that the magnets are alnico? Wheres the 'roll eyes' emoji? LOL
Lighten up amigo, I didn't come here with a bad attitude, that was you kemosabe....

Good morning everybody. Thought I'd say hi and talk about my little 110 RD a second. First time I heard one of these was back in college. My roommate had one and he just raved about it. With good reason, too. Anyway, I was finally able to get one for myself many years later and it's just been a treat this whole time. I noticed it wasn't sounding quite right and that the original speaker was starting to sound a little off. Not sure if any of you ladies & gentlemen are familiar with George Alessandro but he's a fairly well known and sought after kind of amp guy. His shop is a little over an hour drive from me so I reached out to see if he'd check out my old amp and let me know what he thinks. All the tubes are still in working condition and the speaker was starting to fail, as I suspected. So decision time, to re-cone or replace with maybe something better? After talking with George, I chose one of his 10" NEO speakers and does it ever sound GREAT! Just as clean as always but the bottom end is better sounding (IMHO). I kept the original just in case and started searching out replacement grill cloth advice. Do you guys do your own grill cloth replacement or have someone else do it? 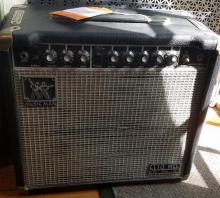 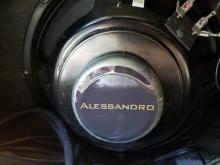